April 20, 1999: The word “Columbine” enters the national lexicon as 13 people are killed, 20 others are wounded, and the 2 shooters commit suicide. 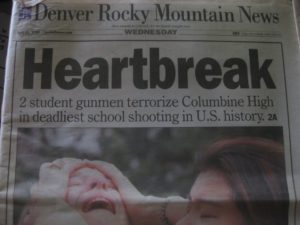 April 20, 2018: School administrators tell students they will be expelled, or prohibited from the graduation ceremony if they participate in a National School Walkout in memory of the Columbine massacre.

An experienced educator would see this moment as an opportunity for an advanced discussion (and learning) about:

Give 30 minutes to walk out and return, then give an hour to study these basic tenets of being a citizen in the US, their history, the difficulties of conflicts between rights and safety, how bills become law, and how protests change (or don’t change) law, how courts decide conflicts.

Like all other adults, those involved in education – whether as an in-classroom teacher or an in-boardroom administrator – are always teaching their students. Students hear what they say, but more importantly, students watch what they do. They learn.

On this nineteenth anniversary of Columbine, it looks like the only thing the school officials were teaching was the abuse of power.